Happy Flute Friday! Often a piece of music tells a more intricate story than a simple melody or a series of exciting runs may convey. Unaccompanied pieces, for example, urge us to look beyond the title and notes for clues within the harmonic and melodic foundation serving as interpretive meanings between the composer and performer. Arthur Honnegger’s, Danse de la Chevre, for example, is more than just a simple “goat dance,” as the title suggests. Analysis of formal and harmonic content indicate that this piece represents a circular event. Perhaps it is a dream. Perhaps it is a commentary regarding the circular nature of life and our search for perfection within chaos. Like the movie Happy Feet, I believe that this piece wants to show us that it is okay march to the beat of our own drum because regardless of our identities, we are all searching for something to love. The song and dance we perform for the world simply represents who we want to be but our values create who we are and stick with us throughout our lives.

First let us examine some basic biographical information about the composer and the piece. Arthur Honegger was born in Le Harve, France on March 10, 1892 and lived a large part of his life in Paris. Although his early studies in harmony and violin began at the Zurich Conservatory, Honegger enrolled in the Paris Conservatoire from 1911-1918. In 1929 he was married to fellow Paris Conservatory student and pianist Andree Vaurabourg on the condition that they live in separate apartments (Strange, right…but the best artist are often eccentrics. It was probably for the best). Honegger was primarily known as member of Les Six and best known for his orchestral work, Pacific 231 (1923) which was inspired by the sound of a steam locomotive. A train enthusiast, he once explained, “I have always loved locomotives passionately. For me they are living creatures and I love them as others love women or horses.” Honegger’s most prolific compositional period was between World War I and World War II when he composed 9 ballets and 3 vocal stage works (including the music for Able Gance’s epic 1927 film, Napoleon). Composing a total of 5 symphonies, most notable is his 3rd Symphony entitled “Symphonie Liturgie” which is evocative of a requiem mass. Honegger died at his home in Paris of a heart attack on November 27, 1955. Danse de la chevre, which translates to “dance of the goat,” was written in 1921 as incidental music for dancer Lysana of Sacha Derek’s play, “La mauvaise pensee,” and is dedicated to flutist Rene le Roy. Rene le Roy was a student of Gaubert at the Paris Conservatorie around the same time that Honegger studied there (1916-1918) and was Gaubert’s successor at the Société des instruments à vent de Paris. The original manuscript to Danse de la chevre has been lost however modern editions have been derived from partial pages found in the works of Honegger’s transcriber (name unknown).

This piece is available for purchase from Amazon: DANSE DE LA CHEVRE FOR UNACCOMPANIED FLUTE

The form of this short piece appears to be cyclical. The music proceeds as follows:

A Section (mm. 1-13) : Introduction – Sets up a unusual scene emphasizing minor 3rds and interconnected 4ths that distort the tonal center of the piece (impressionistic, Debussy-esque opening). In fact, the piece opens with a tritone! Something is not quite right about the this scene…The upcoming dance is foreshadowed in measure 7 in the lower octave as the goat attempts his first dance steps. The opening tritone and interconnected 4ths return to cloud the scene once again and as the goat attempts to find meaning within the strict intervals in 4ths, the music quite literally dances around Bb minor until the goat explodes in frustration with a chromatic scale in measure 13, thus ending the introduction. This goat wants to dance in Bb minor – not whine in minor 3rds and strange interconnected 4ths. The entire “A” section therefore could simply represent the goat’s introductory environment, however frustrating it may be.

B Section (mm. 14-34): The dance. 9/8 time signature with a reoccurring skipping, dotted rhythmic figure (obviously this goat is not an elegant dancer but has his own characteristic, clunky style). Although happily trotting along in F major (with various F minor inflections), the goat experiments with other chromatic tonalities (including a B minor run in measure 21), before another chromatic outburst in measure 24 brings our stubborn goat back to his F major/minor dance. Our goat finds his Bb minor persona in measure 27 but again experiments with A and D minor tonalities in measures 30-31 and after descending sequences separated by 3rds in measure 32 (B minor, G minor, E major – perhaps trying to learn something from his youth) appear in his dance rhythm, they are interrupted again with frustrated descending chromatic patterns in measure 33. This section represents the goat finding his identity, or his dance, through trial and error.

C Section (mm. 35-39): D Major melody. This is the light bulb moment when the uncertainty of the introduction and the chaos of the dance give way to simplicity and beauty. The D Major melody is straight forward and uses hints of the dance rhythm from the previous section in a different tempo and style. Here were find the only appearance of grace notes in the work on the 3rd beats of measure 35 and again in measure 37 (the impending recollection section also contains grace notes in measure 54). This section represents the moment that the goat has fallen in love.

D Section (mm. 40-48): The dramatic dance and downfall. This new, enhanced version of the dance section begins in the highest and most dramatic octave of the flute and solidly dances first in the original F major/minor as before, then around C melodic minor in measure 42-43 and A melodic minor in measures 44-46 until the climax of the piece at measure 47 where a Bb minor scale explodes and falls away into F minor reiterations, bringing the music back into the real world.

B Section abbreviated (mm. 49-53): Return of the dance. The very same music from the opening B section returns for an abbreviated 5 measures with an added rallentando at the end of measure 53 (a recollection?).

C Section abbreviated (mm. 54-57): Return of the major melody, this time transposed to F major. Here the melody begins with a mf dynamic and gradually decreases with a decrescendo in measure 57 to begin the next section in p. Like the previous abbreviated B section, this repetition uses dynamics to musically fade out of the texture. Again, this is a musical recollection of previous compositional material.

B Section recollection (mm. 58-59): This is simply the same Bb minor chord from the end of the original B section (mm. 27). Bb minor was the key that the goat was searching for in the beginning of the piece but did not fully appreciate when he had found it measure 27.

A Section (mm 62-64): The piece ends the same way it begins with a tritone and series of interconnected 4ths and closes with an ethereal C harmonic tone. A return to the uncertainty of the surrounding environment. 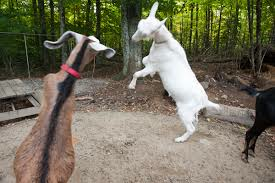 My interpretation of this circular form is that the piece represents the cyclical nature of life. We all enter this world in a state of uncertainty, struggle to find and perform our daily dance, search for love and meaning in our lives, discover conflict, and at the end of our lives we recollect moments from our youth and lessons from our adulthood that made us who we are. Many of us are also surrounded by loved ones (which would explain the return of the major melody toward the end of the piece) and we leave the world just as we entered – uncertain where our souls will travel.

Of course another interpretation based on an analysis of the form is that the goat is merely dreaming and the different sections represent scenes in the dream. The opening section leads us through the clouds and into the dream where a shy goat takes his first few steps (mm. 7), trips and falls over his two left feet (measures 12-13), finds his rhythm and launches into his dance, finds a slow dance (I still believe this is where the goat falls in love), tries to show off for his new love with an extreme version of his dotted dance, falls on his face again and realizes that his original dance was just right. As the dream concludes, the goat begins to wake but recollections of his dream still dance in his head. The return of the A section brings us through the clouds again as the goat awakens from his dream. The final C harmonic represents the moment the goat awakens from his dream. 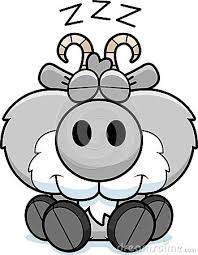